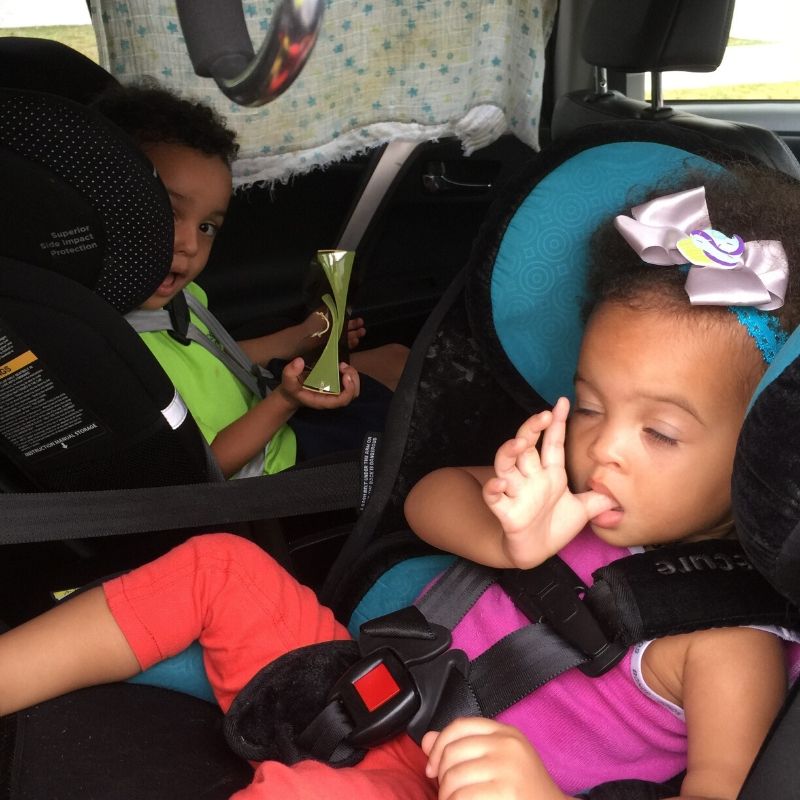 Afew months ago I was in a car accident. I stopped at a traffic light and got rear-ended by another car. The impact was so bad our car was moved into the intersection. The scariest part was that I was with my two children. I remember hearing my youngest’s high-pitched cry. I was so terrified. My babies had no idea what had just happened. So many thoughts went through my mind. I only managed to get them out of the car and hold them.

I often read about and hear a lot of mums saying they are forward facing their babies as soon as they are 6 months old. If I had known what I know now when I had my first, he would have been rear facing until he was 3. These little people we are raising, they have such delicate bodies. It does not take much to hurt them. Every week we read about how a child suffered injuries or even worse, death due to situations that an adult would survive. Rear facing them for a little bit longer is not going to harm them but instead it will save them.

The car safety organization’s research states that, rear facing is safest for both adults and children, but especially for babies, who would face a greater risk of spinal cord injury in a front-facing car seat during a frontal crash.

Now don’t get me wrong, there is research that proves that in the case of a rear-ended accident, rear facing may not be the safest. According to SaferCarGuide.com, frontal and frontal offset crashes combine for about 72% of severe crashes.   Side impacts are about 24%.   Rear and rear offset crashes only account for about 4%. Rear-facing car seats spread frontal crash forces over the whole area of a child’s back, head and neck; they also prevent the head from snapping relative to the body in a frontal crash.

What should I put my baby in?

It is so difficult to get the right car seat that will be safe for one’s baby. We do research, ask other mothers and go from shop to shop looking for the perfect one. I remember with our first child it was all so overwhelming. We finally settled on the Steel craft. I wanted something that would make it easy to take a sleeping baby out of the car into the pram without waking them up. Which meant I had to buy a pram that went with the Steel craft capsule. In this instance it was the Steel craft compact pram.

For some mothers they even plan ahead. They think of a pram that they can tandem use. They also think of car seats that their child will be in for a few years before they need another one. I was one of those who bought a pram that I could use with 2 kids even though I was not even sure if I would have 2 kids.

When my son was due to transition from capsule to car seat, we went with an Infasecure. Now, we had to find something within our price range but at the same time something our son would be in for a few years. Our son is 4 years old and has been in that seat since he was 7 months old.

What I like about this seat is even though both my kids are a bit on the tall side, I managed to rear face them for a little bit longer. My son was rear faced till he was 12 months old and as for my daughter who is 19 months old she is still rear-faced and in an Infasecure car seat. There are so many car seats out there and after a lot of reading I was comfortable having my kids in car seats that they could be rear-faced and be somewhat safe for an extended period of time.

I am pro ERF (extended rear facing) because I have read most research done. While it may be unsafe in a rear-ended accident, majority of the accidents on the road are frontal impact and with that they are the ones that would possibly affect the children in those seats. All I can say to my fellow mothers and fathers out there – if you can, rear-face them a little bit longer. Your babies will cry because they may not like looking at the seat with no entertainment, but put one of those mirrors so they can see themselves. Give them some toys they will play with. These precious little lives cannot say when they get whiplashed and are in pain. They have and need you to protect them.

← Easy Quick Chicken Soup Who Am I →