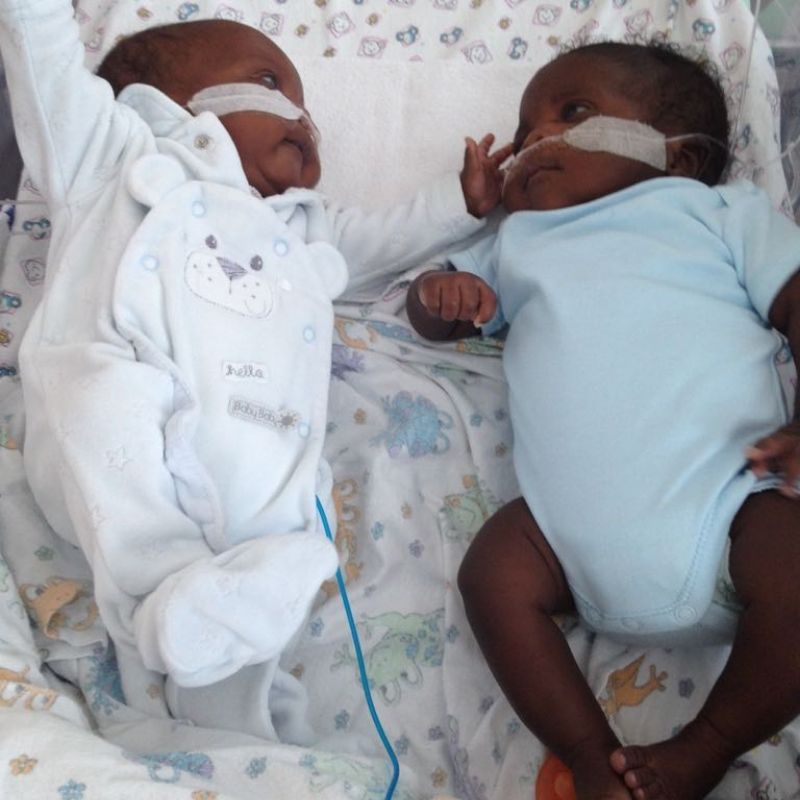 y guest blogger this month is a beautiful mum who was pregnant with twins and had to go through an early delivery due to complications that can happen when having multiple babies. She will talk bit about her thoughts and feelings during the pregnancy and having the twins.

Tell us a little bit about yourself and your boys

I am busy wife and mother of 3 energetic boys. My oldest is 8 years old and I have 3 year old twin boys . Our days are filled with high packed energy activities from basketball to swimming and play dates.

What went through your mind the moment you realized you were in labour/ about to deliver your babies and it was way too early to be having those babies? How far along where you when you had them?

My water broke at 23 .6 weeks while I was at the mall with my husband doing some shopping but because it was that early, I figured it was one of the millions things that one should expect from a multiple pregnancy. I mean, a lot of things had already been happening to me since I had found out about the pregnancy so how was I to assume this was any different. It didn’t help that I was not in pain at the moment either but I do remember feeling exhausted when we got home. I must have slept at 5:30pm or something like that. Then at 5 am the following morning I was woken up by some intense labour like pains followed by tightening of the stomach and I immidiately assumed it was Braxton’s Hicks contractions. When I told my husband, he insisted that we go to the hospital just to be safe and so as a person that didn’t expect to be delivering any babies, I just carried my phone and wallet, nothing else. It was unfortunate because it was a Saturday and when I tried to call my OBGYN she didn’t answer so I rang the hospital. I was booked at Wesley Private Hospital but when I rang them they told me that would be an idea to go to RBWH in case I was in labor as Wesley did not have a NICU.  I guess the nurse was on to something because sure enough when I got to RBWH they confirmed that I was in labour and 2 cm dilated. Ofcourse they had no record or information about me seeing that I was not registered with them and the whole thing just became stressfull for me. I was given medications to stop the labour with the intention to keep the bubs in the oven until at least 30weeks. That would have given them more time to grow and further develop their weak lungs. Well that didn’t work because about a week later I was 9 cm dilated and there was no option but to deliver the babies straight away. The babies were born at 24.6 weeks weighing 680g and 696g via a c-section. It all happened so fast and they were whisked away instantly from the tummy by the NICU team with no chance to hold or see them.

Had the doctors gone through the risks of a pregnancy of multiples? Where there moments you told yourself you were prepared for it?

Yes they had, a number of times actually. To be honest, my response was probably the same as the one most give to a flight attendant during pre-flight safety demonstration. You feel like you have heard it all before and you know it all but when something goes wrong you wish you would have paid more attention. I had read a lot of books, blogs and watched vlogs about multiple pregnancies and it all seemed to be “not too bad”. Now I can certainly tell you nothing could have prepared me for what I went through. It was so bad that at week 10 the doctors told me that the boys were not going to make it and that I was losing them. From week 6 I dealt with everything from large and growing haemetoma, a surgery for a cyst that was also growing, a shortening cervix, bleeding etc. the list goes on. I did ultrasounds weekly and sometimes 2 times a week and when hospitalised (which occurred a few times) they checked everyday and each time I did the ultrasounds my heart would stop just waiting for them to tell me if there were heartbeats or not. The doctor that I was with at the time was very blunt and pretty much told me to prepare for the loss but strangely I had more hope by each day.

How did you feel when you first saw your babies in NICU? What went through your mind? 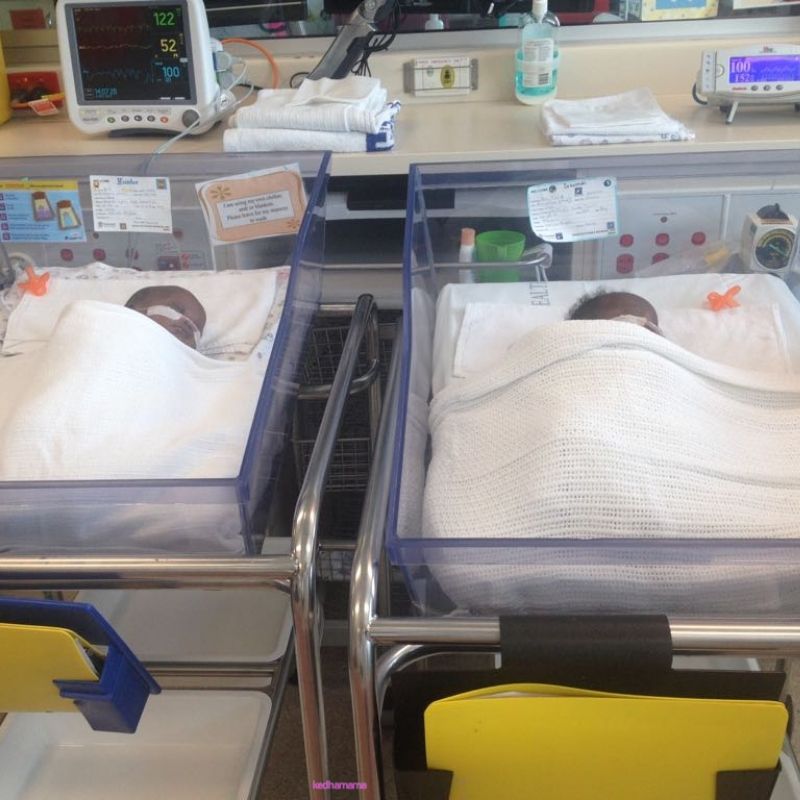 It was bittersweet. I was happy that they were safe and I knew they were in good hands but just seeing them that small and fighting for their lives everyday was really tough. Not being able to hold them for weeks and going home without them was even tougher. I didn’t know what to expect so I took it one day at a time and prayed.

What kept you sane during the months your babies were in NICU?

They kept me sane. I couldn’t afford not to be insane. They all depended on me especially my 8 year old who was 5 at the time. It was tough for him as well because instead of playing in the park with friends or do what ever 5 year olds do, he was in hospital with me on most days. BUT with each day the twins grew and gained weight and watching them get stronger definitely motivated me even more.

Being born that early they had chronic lung disease which meant that they had to be on CPAP for while. Hunter had Apneas as well which was one of the most scariest thing ever. But they both fought hard and luckily they do not have any long term medical issues .

Has being preterm affected their development?

Yes it has affected their development. With every milestone they have always been slightly behind than expected ie stages sitting up, crawling, walking etc. They seem to have caught up on the most parts but still behind in speech and language however they started Speech therapy in June this year and its going really well. I’m starting to hear more words and sentences now.

What was hardest for you and your family, emotionally? Or financially?

The whole ordeal was emotional and physically draining. Not having the boys at home, and having to leave them in hospital every day was tough emotionally. Trying to be there and spend some quality time with my oldest and do some fun stuff for him as well was tough. I felt a lot pressure from the nurses in regards to hospital visits. I always felt guilty to leave but I couldn’t let a 5 year old spend more than 5-6 hrs a day in hospital 7 days week. I used to leave the hospital and have to take my son to the park before having to rush home to express milk and go back to the hospital to drop it off. At some point, I was emotionally and physically crashing but thank God my husband was very supportive and tried to make things easier wherever he could. My mother in law also moved in to help and that eased a lot of pressure which I’m really thankful for.

What advice would you give to that mother who is labour and it’s too early or is sitting by her baby’s bedside or afraid to have kids with the fear of what might happen?

I believe that what will be, will be and that living in fear is just robbing you of what could possible be. Just pray for God to give you the strength and courage to overcome what is not and to bless what is meant for your life. I live by these words and I’m happy to share them with anyone going through tough times or living in fear.