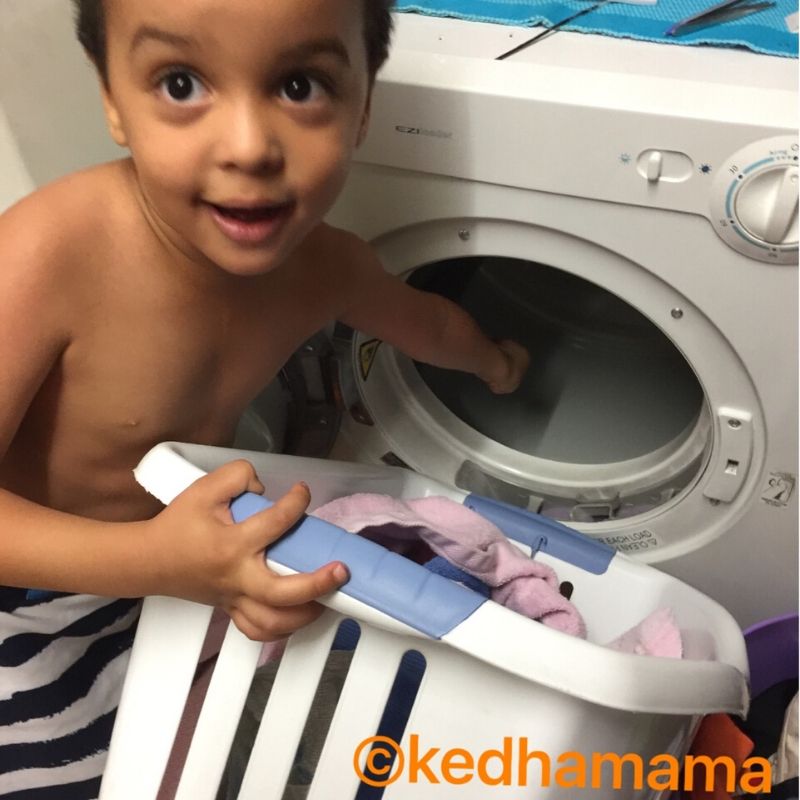 So when is the best time to start giving children chores? With our kids we start from the time they start getting the concept of putting away toys. With Kupa we started pretty early. I would encourage him to help me put the toys away. Putting his clothes in the dirty laundry basket, putting his shoes on the shoe rack. I also tried to make it a fun game so he would not hate doing the things mama asked him to do. Lil miss Nashe has also started doing the same because does everything big bro does.

You know what, he is 4 and makes his bed as soon as he wakes up. All this is because I would encourage him to help me make his bed every morning. How much do you hate coming home to toys all over the floors and all you want to do is put your feet up and rest? To be an OCD person who finds it difficult to relax no matter how much you tell yourself you can clean up later and then you just end up cleaning up despite the fact that you wanted to relax. I am one of those who hate it. So devised a system, clean up before we leave the house, every time. Sometimes I get the tantrums because no one wants to help mama pick up the toys but they now know, especially Kupa, that we won’t leave until its done.

The Center For Parenting Education http://centerforparentingeducation.org did some research and found out that those children who do have a set of chores have higher self-esteem, are more responsible, and are better able to deal with frustration and delay gratification, all of which contribute to greater success in school. Doing chores gives a child the opportunity to give back to their parents for all you do for them. Kids begin to see themselves as important contributors to the family. They feel a connection to the family. Holding them accountable for their chores can increase a sense of themselves as responsible and actually make them more responsible. Children will feel more capable for having met their obligations and completed their tasks.

With more research and reading on WebMD I found that when assigning chores to children, a parent should not expect perfection, as no one is perfect. Do not hold back on praises when they have done what you tasked them to. This builds positive momentum. Parents should always be consistent enforcements of the chores they task to their children.

Be specific with instructions. Pantley an author of parenting books such as Kid Cooperation: How to Stop Yelling, Nagging, and Pleading and Get Kids to Cooperate, says, “‘Clean your room’ is vague and can be interpreted in any number of ways. Instead, be explicit by saying, ‘Put your clothes in the closet, books on the shelf, dishes in the kitchen, and toys in the toy box.’” Clear instructions are easily understood and children tend to follow them.

Ease into chores for children. First, show them how to do the chore step by step. Next, let your child help you do it. Then have your child do the chore as you supervise. Once your child has it mastered, she’s ready to go solo. Go easy with reminders and deadlines. You want the chore to get done without you micromanaging it. Pantley recommends the “when/then” technique. For example, say, “When the pets are fed, then you may have your dinner.”

I have found that most of these techniques help when it comes to our children. There are times I have had to use bribery to get things done but most times I have noticed that the things I have encouraged from the beginning are second nature to them. They put their clothes in the dirty laundry after undressing. Kupa tries to make his bed as soon as he wakes up. When I am doing the dishes they want to help me. They try and put most of their toys away in their right place when we are about to leave the house. Make it fun for them and you find that they will willingly do it.

We haven’t yet reached the allowance age so I don’t know if we will be giving allowance for doing chores like some households or making allowances a different reward. That’s a post for another time.